Fenrir is a supernatural giant wolf mentioned in Norse mythology and in several other Germanic mythologies.

Loki is the father of Fenrir and Angrboda his mother. His two siblings are the Midgard Serpent Jormungandr and Hel the Underworld Goddess. Fenrir Hel and Jormungandr will fight and defeat some of the strongest Aesir gods at Ragnarok, according to the prophecy.

Fenrir grew up in Asgard. At first he was small and harmless cub, but it soon grew to an incredible size and frightened the Aesir. Eventually, they agreed it should be bound so they could control it.

Unfortunately, this could not be done with the wolf's good will and no Aesir dared to force it. They made the chain Loding to tame it, and persuaded the wolf to try the chain to see how strong it was.

Fenrir broke the chain with ease, and they then made the chain Dromi. Again the gods had to challenge the wolf to see if it could get out of the chain, and once again Fenrir was able to destroy it.

Then they got the dwarves to forge the magic chain Gleipnir, which was made from the breath of fish, the saliva of birds, the sinews of bears and the roots of mountains, the noise of cat's paws and a woman's beard.

The chain was quite thin, so when the gods challenged Fenrir again, he required Tyr to put his left hand in its mouth, as the wolf suspected something was up. When the chain tightened and Fenrir could not get free, he bit off Tyr's hand. Fenrir is now tied up in a cave near Amsvartner in Jotunheim. Until Ragnarok, the wolf howls with rage in the cave. The gods put a sword across the maw of the raging wolf to stop it snapping at them. Fenrir therefore cannot close his mouth and from the thread protruding from his mouth is formed the raging river Von that runs through Jotunheim.

At Ragnarok he will finally break free, and then it will swallow Odin, but afterwards Odin's son Vidar avenges him by throwing Odin's spear Gungnir into its mouth, thus killing it.

The story of Tyr and Fenrir is found in Gylfaginning in the later Edda. It is also mentioned in Loki's quarrel in the Elder Edda. Fenrir in the Eddas

The tale of the sacrifice of the god Tyr's hand in Fenrir's jaw is told in detail in chapter 34 of Gylfaginning, and is also mentioned in chapter 25 as an "example of his boldness". Fenrir is raised by the Aesir and grows so much that only Tyr has the courage to give him food.

The Aesir then decide to chain him so that he cannot fulfill the prophecy as he will cause their downfall. They make a chain (Loding) and challenge him to free himself he then submits and succeeds. Then they make another stronger one (Dromi) but he breaks away immediately. Fearing that they could not imprison him, the Aesir sent the messenger Skirnir to Svartalfaheimr, to the dark elves, to make a magical bond: Gleipnir, made by ingredients that no longer exist: cat's footsteps, woman's beard, mountain roots, bear's sinews, fish's breath and bird's spit.

The bond then has the appearance of a silk ribbon. They ask Fenrir to submit to the test once more, but he replies that he has nothing to gain by breaking a simple ribbon and, if it was magical, he does not trust them to free it. He only agrees to do so if one of them puts his hand in his mouth as a sign of good faith.

Only Tyr has the courage to accept the proposal, and he does so. Fenrir struggles but the more he tries to free himself, the more the ribbon stiffens. Then all the Aesir burst out laughing, except Tyr, who had just lost his hand. 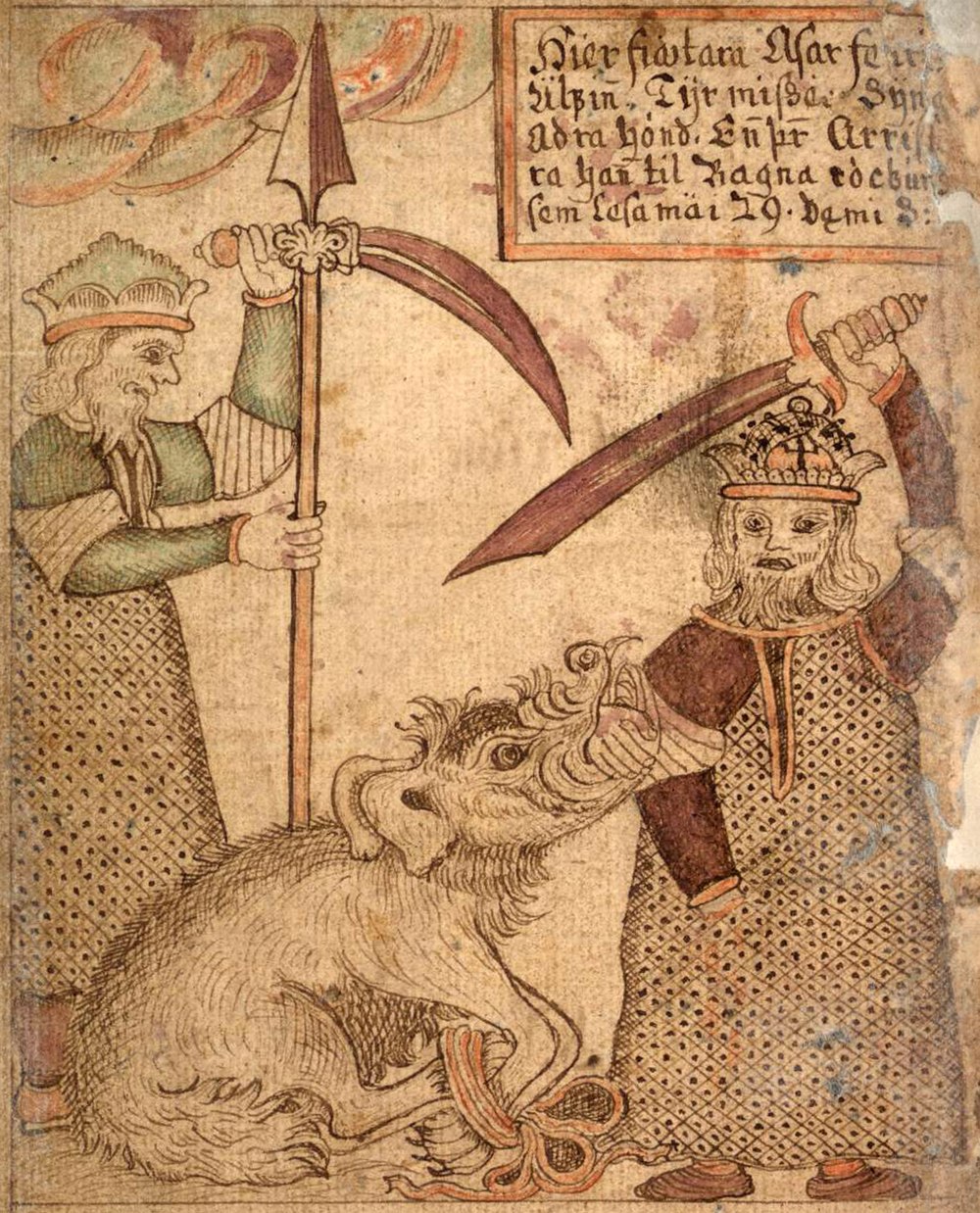 The gods tie the bonds to the ground while Fenrir struggles and tries to bite them. To prevent him from doing so, the Aesir put a sword across his mouth (the guard resting on the lower jaw and the point opposite).

Since then, the wolf never stops roaring, and slime flows from his jaws forming the rivers Ván (hope) and Víl (will). He will remain bound until the prophetic battle of Ragnarök, when all chains will break.

In Gylfaginning, it is prophesied that a great battle will take place in which the giants, led by the god Loki, will attack the Aesir on the plain of Vígríd. This event is called Ragnarök. All chains will break, and the wolf Fenrir, like his father Loki, will be released.

The fire giant Surt will fight alongside the other forces of chaos and set the world on fire, which will sink into the ocean. During this battle, the majority of the gods, and all men except a couple, Líf and Lífþrasir, will perish.